Researchers from the ICCUB lead the article highlighted by the Astronomy and Astrophysics editorsby Romero-Gomez, et al., 2019, A&A, 627, A150

The authors use the Gaia Data Release 2 astrometric data down to G = 20mag to characterize the structure of the Galactic warp, including the related vertical motions, and the dependency of Galactic warp on age. The authors analyze two populations out to Galactocentric distances of 16kpc: a young bright sample of OB stars and an older red giant branch star sample. The onset radius of the Galactic warp is at 12-13kpc for the young sample and 10-11kpc for the older sample. The height of the warp is of the order of 0.2kpc for the young sample and 1.0kpc for the older sample at a Galactocentric distance of 14kpc. The older sample reveals a slightly lopsided warp with a difference of ?250pc above and below the plane. The maximum line of proper motions in latitude is systematically offset from the line of nodes that is estimated from the spatial data, which is the kinematic signature of lopsidedness. The results also show a prominent wave-like pattern of a bending mode different in both the young and older stellar samples. Both positions and kinematics also reveal substructures that are not necessarily related to the large-scale Galactic warp or to the bending mode. This analysis reveals a high degree of complexity in terms of both position and velocity, which in turn shows the need for complex kinematic models that are flexible enough to combine both wave-like patterns and an S-shaped lopsided warp. 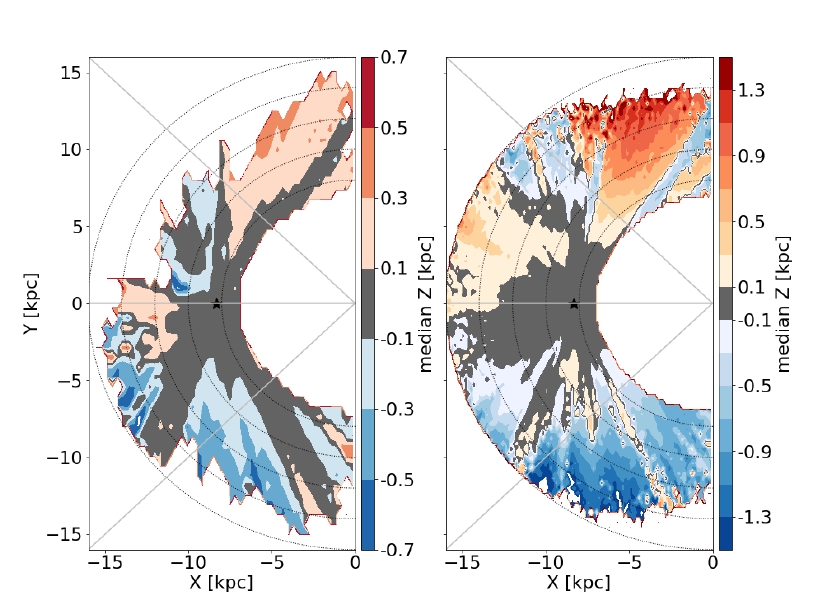