Schematic artist’s impression of the changing jet orientation in V404 Cygni. Each segment (as separated by the clock hands) shows the jets at a different time, oriented in different directions as seen in our high angular resolution radio imaging. 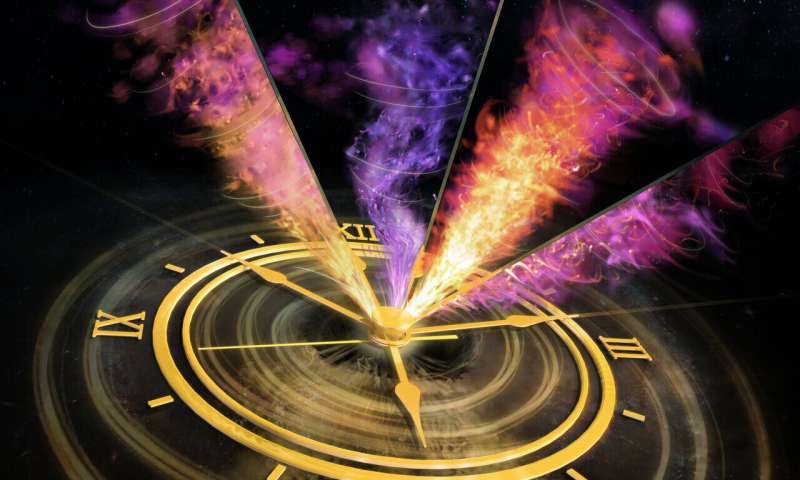 Schematic artist’s impression of the changing jet orientation in V404 Cygni. Each segment (as separated by the clock hands) shows the jets at a different time, oriented in different directions as seen in our high angular resolution radio imaging.

Published today in the journal Nature, the research shows jets from V404 Cygni's black hole behaving in a way never seen before on such short timescales. The jets appear to be rapidly rotating with high-speed clouds of plasma—potentially just minutes apart—shooting out of the black hole in different directions. They used observations from the Very Long Baseline Array, a continent-sized radio telescope made up of 10 dishes across the United States, from the Virgin Islands in the Caribbean to Hawaii.

The lead author is the Associate Professor James Miller-Jones, from the Curtin University node of the International Centre for Radio Astronomy Research (ICRAR). He considers black holes as the most extreme objects in the Universe. “This is one of the most extraordinary black hole systems I’ve ever come across,” Associate Professor Miller-Jones says, “Like many black holes, it’s feeding on a nearby star, pulling gas away from the star and forming a disk of material that encircles the black hole and spirals towards it under gravity”.

V404 Cygni was first identified as a black hole in 1989, when it released a big outburst of jets and material. “What’s different in V404 Cygni is that we think the disk of material and the black hole are misaligned, probably causing the inner part of the disk to wobble like a spinning top, and fire jets out in different directions as it changes orientation.” 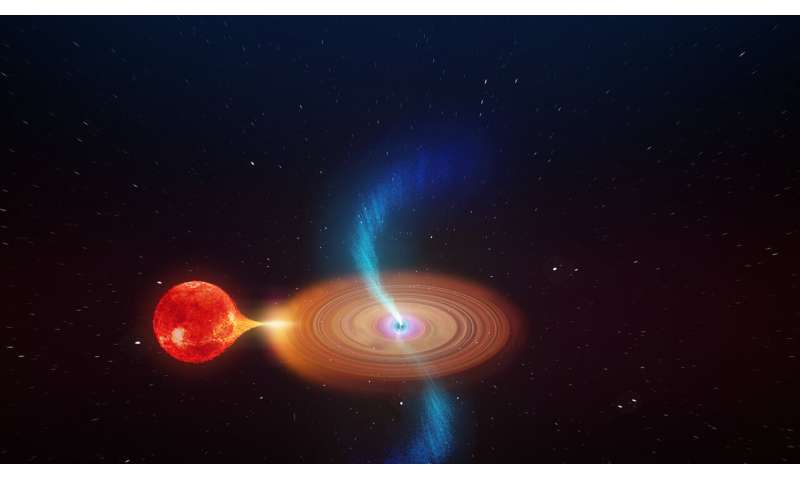 Artist's impression of V404 Cygni seen close up. The binary star system consists of a normal star in orbit with a black hole. Material from the star falls towards the black hole and spirals inwards in an accretion disk, with powerful jets being launched from the inner regions close to the black hole. Credit: ICRAR

Astronomers had found previous outbursts looking at archival photographic plates from 1938 and 1956. When V404 Cygni experienced a two-week long outburst in 2015, telescopes around the world tuned in to study what was going on. The team then saw its jets behaving in a way never seen before. Where jets are usually thought to shoot straight out from the poles of black holes, these ones were shooting out in different directions at different times.

Professor Miller-Jones thought that the change in the movement of the jets was because of the accretion disk, which in V404 Cygni’s measures 10 million kilometres wide, “You can thinkof it like the wobble of a spinning top as it slows down—only in this case, the wobble is causedby Einstein’s theory of general relativity.” 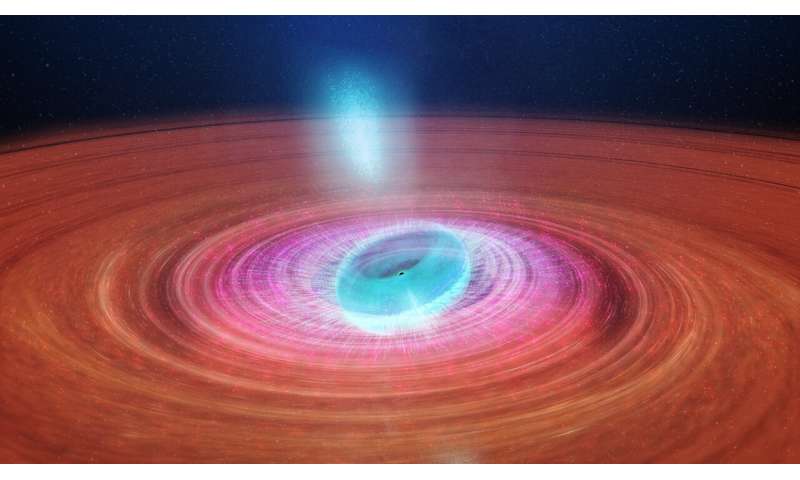 Artist's impression of the inner parts of the accretion disk in V404 Cygni. The black hole rotates about a different axis to the binary orbit. As the spinning black hole drags spacetime around with it, the puffed-up inner accretion disk wobbles around like a spinning top. The jets launched from the innermost parts of the flow are redirected, either by the puffed-up inner disk or the strong winds being driven off it by the intense radiation. Credit: ICRAR

One of the co-authors of the study is Alex Tetarenko, a recent PhD graduate from the University of Alberta and currently an East Asian Observatory fellow working in Hawaii.“Typically, radio telescopes produce a single image from several hours of observation,” shesaid. “But these jets were changing so fast that in a four-hour image we just saw a blur. It was like trying to take a picture of a waterfall with a one-second shutter speed.” Instead, the researchers produced 103 individual images, each about 70 seconds long, and joined them together into a movie so they could see those changes over a very short time period.

This paper is the latest of a series of publications, resulting from a long project to study relativistic jets in binary systems of black holes and neutron stars. The astrophysicist Dr. Simone Migliari is a visiting scholar at ICCUB, and currently works as a Senior Operations Scientist at the XMM-Newton Science Operations Centre of European Space Agency. He has been collaborating with the project during several years. In this concrete publication, he participated in the theoretical discussion of the results, particularly in those concerning the relations between the radio jet and the X-ray emission from the misaligned disk.

“Because of the effects of its extreme gravity, you wouldn’t expect matter to be able to escape from the region of the disk closest to the black hole. Yet, from this very region, matter is ejected at a significant fraction of the speed of light in form of jets”, Migliari says. This study unveils more information about the closest regions to the black hole, still a matter of a study. “The misalignment between the disk of material and the black hole gives us information about the geometry and the behaviour of the matter around it”.

This finding adds knowledge to the recent discoveries of the gravitational waves and the first image of a black hole.