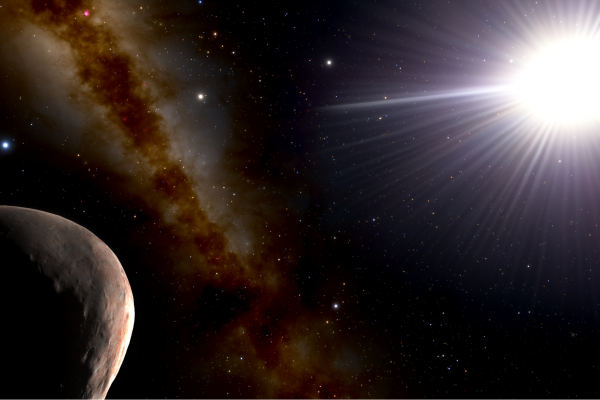 An International team of astronomers led by researcher Toni Santana-Ros, from the University of Alicante and the Institute of Cosmos Sciences of the University of Barcelona and member of the Institut d'Estudis Espacials de Catalunya, has confirmed the existence of the second Earth Trojan asteroid known to date, the 2020 XL5, after a decade of search. The results of the study have been published today, February 1, in the journal Nature Communications.

All celestial objects that roam around our solar system feel the gravitational influence of all the other massive bodies that build it, including the Sun and the planets. If we consider only the Earth-Sun system, Newton’s laws of gravity state that there are five points where all the forces that act upon an object located at that point cancel each other out. These regions are called Lagrangian points, and they are areas of great stability. Earth Trojan asteroids are small bodies that orbit around the L4 or L5 Lagrangian points of the Sun-Earth system.

These results confirm that 2020 XL5 is the second transient Earth Trojan asteroid known to date, and everything indicates it will remain Trojan —that is, it will be located at the Lagrangian point— for four thousand years, thus it is qualified as transient. The researchers have provided an estimation of the object bulk size (around one kilometer in diameter, larger than the Earth Trojan asteroid known to date, the 2010 TK7, which was 0.3 kilometres in diameter), and have made a study of the impulse a rocket needs to reach the asteroid from Earth.

Although Trojan asteroids have been known to exist for decades in other planets such as Venus, Mars, Jupiter, Uranus and Neptune, it was not until 2011 that the first Earth Trojan asteroid was found. The astronomers have described many observational strategies for the detection of new Earth Trojans. “There have been many previous attempts to find Earth Trojans, including in situ surveys such as the search within the L4 region, carried out by the NASA OSIRIS-Rex spacecraft, or the search within the L5 region, conducted by the JAXA Hayabusa-2 mission”, notes Toni Santana-Ros, author of the publication. He adds that “all the dedicated efforts had so far failed to discover any new member of this population”.

The low success in these searches can be explained by the geometry of an object orbiting the Earth-Sun L4 or L5 as seen from our planet. These objects are usually observable close to the sun. The observation time window between the asteroid rising above the horizon and sunrise is, therefore, very small. Therefore, astronomers point their telescopes very low on the sky where the visibility conditions are at their worst and with the handicap of the imminent sunlight saturating the background light of the images just a few minutes in the observation.

To solve this problem, the team carried out a search of 4-meter telescopes that would be able to observe under such conditions, and they finally obtained the data from the 4.3m Lowel Discovery telescope (Arizona, United States), and the 4.1m SOAR telescope, operated by the National Science Foundation NOIRLab (Cerro Pachón, Chile).

The discovery of the Earth Trojan asteroids is very significant because these can hold a pristine record on the early conditions in the formation of the Solar System, since the primitive trojans might have been co-orbiting the planets during their formation, and they add restrictions to the dynamic evolution of the Solar System. In addition, Earth Trojans are the ideal candidates for potential space missions in the future.

Since the L4 Lagrangian point shares the same orbit as the Earth, it takes a low change in velocity to be reached. This implies that a spacecraft would need a low energy budget to remain in its shared orbit with the Earth, keeping a fixed distance to it. “Earth Trojans could become ideal bases for an advanced exploration of the Solar System; they could even become a source of resources”, concludes Santana-Ros.

The discovery of more trojans will enhance our knowledge of the dynamics of these unknown objects and will provide a better understanding of the mechanics that allow them to be transient.