Núria Miret, former student of the University of Barcelona, awarded the MERAC 2022 prize 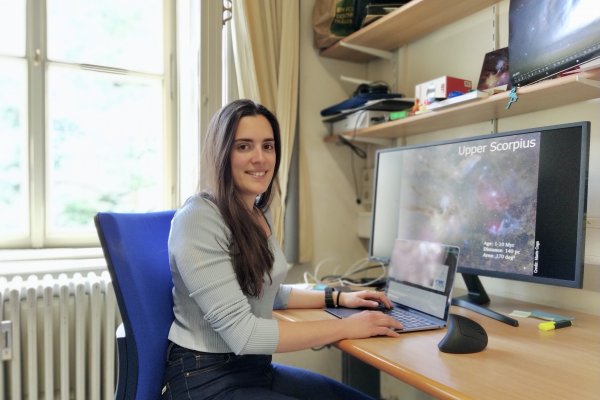 With this award, the MERAC Foundation gives special recognition to Dr. Miret for the discovery of about a hundred new free-floating planets, which allowed the study of the origin of these exotic nomad planets. For the first time, she showed that free-floating planets are not only formed by the gravitational collapse of small cores (like low-mass stars) but also in planetary systems and then ejected via dynamical interactions.

As Dr. Miret says, “doing a PhD is a great challenge during which one must overcome a number of obstacles, but it is also very gratifying, once the results finally come”. The astrophysicist feels grateful for receiving this distinction and she wants to share it with her thesis supervisors and team.

“My master’s thesis supervisors at the UB were a great inspiration for me, and they doubtlessly contributed to my decision to pursue a scientific career”. The master’s degree at ICCUB and especially with the Gaia group permitted her to begin her research career and were key to developing her thesis. Her master’s thesis supervisors were Teresa Antoja and Mercè Romero, both researchers at the ICCUB. She mentions that Francesca Figueras was a crucial mentor for her as well.

In her own words, “I hope this award inspires the future generation of female astronomers”.

Francesca Figueras, full professor at the Department of Quantum Physics and Astrophysics of the Physics Faculty, remarks that the first academic steps of this researcher took place at the University of Barcelona. In 2016, Núria Miret completed her bachelor’s degree at the Physics Faculty. Immediately after that, she joined the Institute of Cosmos Sciences of the UB to complete the Master’s in Astrophysics, Particle Physics and Cosmology, where she published her first works on the evolution of young star clusters on the solar neighbourhood using data from the Gaia satellite (ESA).

Her achievements at the ICCUB granted her a predoctoral fellowship in Bordeaux where she carried out her doctoral thesis. Now, she is in her first postdoctoral research stay in Vienna, where she continues to collaborate with the Gaia group at the UB. In this sense, she says, “the methodology that we developed during my masters at the ICCUB to determine the ages of young star clusters is fundamental for the projects in which I am currently involved on. Furthermore, we have a project with the goal of reviewing the origin of the main young star clusters in the solar neighbourhood with the newly published data of the Gaia Satellite”.

For more information, read the news piece published by the University of Barcelona or the Spanish Astronomical Society.