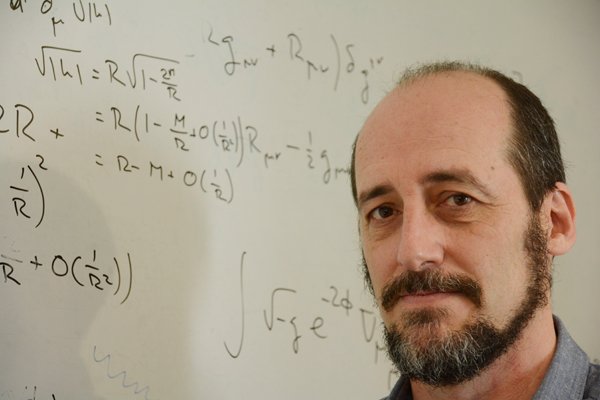 Roberto Emparan, an ICREA Research Professor and Group Leader of the Institute of Cosmos Sciences of the University of Barcelona (ICCUB), was awarded the Narcís Monturiol Medal 2022 to scientific and technological merit. The Catalan Government gave these awards, instituted in 1982, to ten researchers from the Catalan educational system.

The resolution was published last Tuesday, July 5, and with it, the Catalan Government has bestowed 301 Narcís Monturiol Medals (232 to men and 69 to women) to foster scientific and technological advance.

Roberto Emparan is one of our most internationally recognized physicists in the field of gravity, black holes and superstring theories. His research focuses on the study of gravity, the structure of space-time, and black holes, in both classical and quantum aspects. He has published more than 100 research articles and given over 200 invited talks and lectures on black holes, string theory, and cosmology.

Along his career, he has broken new grounds in the physics of gravity and black holes on several occasions, creating wholly novel lines of investigation. His explorations span broad areas of modern gravitational theory, but their impact is most strongly felt at the interface between General Relativity and String Theory.

Besides academia, Prof. Emparan is also earnestly committed to meaningfully returning to society its investment in basic science. In recent years he has developed an intense activity of outreach – in a large number of public talks, press and other media, and in particular with his general-audience book “Iluminando el lado oscuro del Universo – Agujeros negros, ondas gravitatorias y otras melodías de Einstein”, published in 2018 by a major editorial house (Ariel-Planeta).

In the words of the researcher, “I have a life-long fascination with the physics of black holes, the dynamics of space and time, and gravity, and I devote my efforts to deepening our understanding of these notions which lie at the foundations of the universe. If we succeed in bringing about a fusion of them with the quantum –the pursuit of a quantum theory of gravity– we will have reached a milestone in the history of humankind: a unified conceptual basis for all of Nature”.  This distinction is an acknowledgement to years and years of scientific contributions and it will encourage the continuation of a remarkable career.