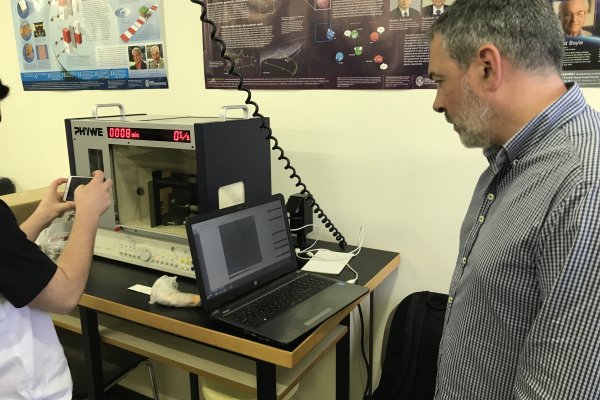 In this paper, the authors address the relevance of the ADMIRA (Activitats amb Detectors Medipix per Investigar la Radiació a l’Aula) project from several points of view, putting special emphasis on the importance of experimentation in higher education. One of the characteristics of the pre-university physics curriculum in Spain, as well as in other countries, is the lack of concepts and models corresponding to physics developed during the second half of the 20th century. Furthermore, when introducing the basic concepts of the physics of the Standard Model (SM), or even the atomic-molecular theory of matter, the difficulty that students have in accepting the description of the model, is quite high. The fact that the mathematics involved in theoretical development is well above the level that the students have previously acquired, also does not help to make a formal mathematical description of the subject.

Therefore, in the case of the approach of the SM for secondary education, experimentation is a key tool that can help students grasp these abstract concepts and gain a solid physical intuition of particle physics phenomena. This can inspire many young adults to pursue STEM careers or, if not that, to become better-informed, self-critical citizens of tomorrow’s society. “The use of CERN developed Timepix detectors and their effect on the motivation of the students has been widely documented by the Institute for Research in Schools (IRIS), as well as its effects by increasing STEM vocations, especially among girls”, remarks Daniel Parcerisas, first author of the publication, who has seen this effect on his own students. The detector and readout allows the students not only to research topics related to particle physics but also in other fields like dosimetry, medicine, chemistry or information technologies.

The project has allowed for the creation of a network of students, teachers and researchers from the participant institutions that fosters knowledge transfer and strengthens the scientific and educational local communities.

The ADMIRA initiative originated in late 2017 arising from the collaboration of several individuals from different institutions with the aim of creating a local network of schools using Timepix detectors, designed at CERN, to introduce particle physics into the classroom. The ultimate objective of the project is to bring research closer to the students in order to promote new scientific and technical vocations.

In order to do so, it has established, since September 2019, a loan system for the detectors during a few weeks for the different schools participating in the initiative. It also provides training to the teachers to optimally use the detector and on topics related to particle detection.

Currently, there are 20 schools participating in the program in the academic year 2021-2022, with more than 200 students that used the detectors to take measurements in the labs and experimentally study particle physics. In the project’s website, you will be able to find the work of some of these students, as well as use the materials and activities proposed by the participant teachers.

The published article is the result of a collaboration of individuals from different and complementary educational and research institutions. “Even though I might have led the coordination of this work, this is a collective achievement that involves many people from diverse areas: CERN, the schools, the ICCUB, the IDP-ICE…” states Mr. Parcerisas. He also adds that “Counting with Rafael Ballabriga as main co-author and being able to benefit from his experience in publishing scientific papers has been priceless, and it has allowed me to learn a lot of things during this process”. Rafael Ballabriga (CERN) and professor Eugeni Graugés (Institute of Cosmos Sciences of the UB) have had a leading role in the project since it started in 2017.

Looking ahead, the CERN participants are working to disseminate the lessons of ADMIRA, and other educational experiences related to Medipix/Timepix devices, more widely throughout the CERN member states and beyond. The CERN Medipix team has acquired several Timepix readout systems to be distributed through institutes and individuals already involved in the Medipix Collaborations. The idea is to bring many of the key aspects of ADMIRA to build local networks, magnifying the global impact of the project. The initiative is called Timepix Teachers Network.